Take a vespa at Umbria in Vespa (just few miles from Passo del Lupo: http://www.umbriainvespa.com for more details) and drive wild to Assisi in 30 minutes.

Easter is definitely one of the most beautiful moment of the yaer to experience in Assisi. The city of the poor saint, worldwide synonymous of spirituality and ancient traditions, lives the resurrection of Christ with passion and intensity. This time of the year is, then, the prelude to the summer season: in spring the Subasio starts to become covered with flowers of many colors; shops, museums, hotels, restaurants open full of joy and energy.
Easter is for many the occasion of the first outing of the season and Assisi is just the right city to be!

In Assisi the traditional rites of the Easter Triduum paraliturgical (Thursday 24, Friday 25 and Saturday, March 26) are among the most characteristic of Umbria. It begins on Holy Thursday in the Cathedral of St. Rufino, with “Scavigliazione” (ie the Deposition of the Crucifix), a tradition that takes inspiration from a fourteenth-century hymn dedicated to the Passion, actually called “Lauda of Scavigliazione”.

The morning of Good Friday, the dead Christ is transferred from San Rufino, home of the Saint of Assisi, to the Basilica of St. Francis with a path that passes through the city’s main monasteries. In the afternoon in the S. Maria Maggiore Church are celebrated “Three Hours of Agony”. At night, with the city lit by torches, it kicks off the evocative Procession of the Confraternities, attended by all the ancient brotherhoods of Assisi. The route starts in San Rufino and arrives at the Basilica of San Francesco from where it proceeds back into the cathedral with the Dead Christ. In these two shrines it is then celebrated the Vigil that ends in late evening with the Mass.

Easter Sunday is the feast of Our Lord’s Resurrection. The day starts well with the traditional Umbrian Easter breakfast: Easter cheesecake and sweet, capocollo, boiled eggs, torcolo, chocolate. Mass is celebrated in the morning everywhere in all the churches of Assisi. Church services follow one another without interruption throughout the morning and some are even celebrated in the early afternoon.

The Easter Monday is the time of the traditional Easter Monday outing. The heart is light, the next day we will return to work, but we still have a whole day for us. The Mount Subasio Natural Park is ready to wrap us with green, flowers, landscapes and glimpses from the past; picnic or some restaurant of typical Umbrian cuisine and then relax. 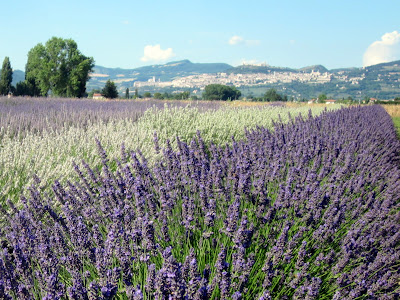 Panicale is just some 20ish km from Passo del Lupo; trip tip: take a vespa at Umbria in Vespa (http://www.umbriainvespa.com/en/) and have the chance to enjoy easy driving along Trasimeno lake and sunflower fields to Panicale in 20 minutes.

PANICALE is an historic and picturesque town in the Province of Perugia, perched atop of a hill at 441 mt above sea level. It owes its appearance to the medieval origins of which it still retains all the structural and architectural. The plan of the country in concentric circles showes one of the most advanced systems of military defense in subsequent levels typical of the medieval era. In fact this type of defensive structure allowed the castle Panicale to withstand numerous attacks to which it was exposed.

Although the church of Madonna delle Sbarre and that of St. Augustine are not certain buildings to leave without mentioning, the main attraction of the village is represented by magnificent views as from here you can enjoy the lake Trasimeno and the valley of the River Nestore: overlooking from the north ridge of the hill you can admire a splendid panorama over the plain of Lake Trasimeno with a 180 ° leading the eye from the rolling hills of Siena to the most rugged mountains of Umbria and Marche.

However anyone who is more interested in the artistic works can admire the two frescoes Martyrdom of St. Sebastian and Coronation of Mary painted by Pietro Vannucci called “Il Perugino”. Noteworthy are also the fifteenth-century fountain in Piazza Umberto I, the frescoes of Caporali and structures such as the Municipal Theatre, one of the smallest theaters in Umbria, the Collegiata di San Michele, the church of Madonna della Sbarra, the fourteenth-century Palazzo del Podesta today historical city, once the seat of political power.

Where to eat? well…why not taking the suggestion of a famous American chef Nancy Silverton who eventually chose to buy a house in Panicale…?

Umbria is one of the few regions of Italy not washed by the sea but even so, water sports thanks to the Trasimeno Lake, are the way to have fun and to keep in good shape while being surrounded by nature. Its environmental characteristics, width and shallow depth make it the ideal place to practice these kinds of sports like sailing, canoeing, kitesurfing and wakeboarding.

The Beach Tuoro (at Punta Macerone) located a few kilometers from Passo del Lupo, is certainly the largest beach along the shores of Lake Trasimeno. No doubt the place for those who want to enjoy kitesurfing and wakeboarding and the fun of water sports in general, staying on top of the wave, but also for those who want just to spend quiet days of sunshine and relax at the lake .

If you intend to approach to these fascinating activities, but also other water sports such as sailing, kayaking and windsurfing, you can visit the lake Trasimeno in various towns such as Castiglione del Lago (Via Belvedere), Monte del Lago, and Polvese Island (New Beach).
You will find fantastic and attractive places both to indulge in sports or to benefit of beautiful sunny days.

Tuoro is about 20 minutes drive from Passo del Lupo.

The peaceful town of Tuoro sul Trasimeno was once the scene of one of the bloodiest battles of antiquity: the Battle of Trasimeno, one of the most important of the Second Punic War, which took place at dawn on June 21 217 BC, with the defeat of Roman army led by the consul Caio Flaminio by the Carthaginians of Hannibal. The beautiful area of the lake is today an open air museum.

It’s possibe to visit the route Hannibal made inn his invasion of the Italian peninsulain accordance with the studies of Giancarlo Susini up to the fields that were the scene of the epic battle between the Romans and Carthaginians. Currently there are twelve rest areas where they are in-depth various issues related to the battle and the history of the places. Along the way there are rest stops with information boards and historic – environmental signs.

The Carthaginian general Hannibal Barca, the greatest leader of his time, is coming down Italy (via the Pyrenees and Alps) driving a heterogeneous army of about 50,000 men, 9,000 horses and 37 elephants.

The army was originally made up of Africans (Carthaginians, Numidians, Libyans and Moreschi) along the long march had been enlarged first with the arrival of Iberians (Balerai, Guaschi and Asturians), then the Celts and finally the Ligurian and the Insubri (the inhabitants of the valley of Insubria in Varese area).

Annibale defeated the Roman armies on the Ticino and Trebbia … and then was marching to invade Rome (or rather pretended to …).

The elephants, the ancestors of modern tanks, which had crossed the Alps were by that time all dead.
Hannibal climbed over the Apennines and at the river Arno stopped his men, who had been reduced to 40,000 because of the plague, in the Hills between Monte Gualandro and Montigeto near the current Tuoro sul Trasimeno.

Maeantime from the Chiana valley the militias of the Consul Caio Flaminio were trying to reach and chase him.

The Romans were about 25,000 men and therefore were outnumbered.

The Romans had camped on “Montes Cortonenses” between Cortona and Trasimeno.

It was June 24 217 BC and the Consul Caio Flaminio, was convinced that Hannibal was still at least a day’s march from Trasimeno, and therefore decided to move to the North to rejoin the ranks of the Consul Servilius who was descending from Rimini.

Caio Flaminio was running along the lake and decided to cross the valley from Borghetto to Tuoro without using special precautions, or without checking what really was in the hills.

Roman militias moved twisting and turning for over one kilometer almost in single file along a road, still called the Malpasso (“unfortunate passage”).

The classic fog that surrounds the lake was then as now and Hannibal attacked from above with the cavalry mercilessly.

The Roman army was immediately with the left side completely open and could not escape beacuese of the reeds of Lake Trasimeno … and it was a massacre.

Over 16,000 legionnaires died and the stream passing through the valley from that day changed his name in Sanguineto (“bloody river”).

Only six thousand broke the encirclement toward the current Castel Rigone.

For the Roman armies was one of the battles with the highest number of deaths, third only to the defeat with more than 50,000 losses of Cannae, again by HAnnibal, and the massacre of 25,000 legionnaires in the Black Forest of Germany, but this is another story….

EUROCHOCOLATE: from 16th to 25ft of October in Perugia.

The Eurochocolate is an exciting event which suits perfectly for whomever likes chocolate….It takes place every year in Perugia.

The event, founded in 1993, is today the largest and most important event about chocolate in Europe and it’s an opportunity to enjoy the town and taste many different recepits of chocolate.

Each year almost a million visitors come to Perugia Eurochocolate.  The event lasts ten days and takes you along the main streets and squares of the historic center of the city: Piazza Italy, Republic Square, Corso Vannucci, Via Mazzini, Via Fani, Terrace of the Covered Market and Piazza IV Novembre.

The Eurochocolate visitors can take part in numerous activities linked to chocolate, all completely free as exhibitions, tastings, performances and chocolate sculptures.